You may have noticed (and if you didn't I won't hold it against you as I only mentioned it once) that I missed Writer's Sunday yesterday.
I actually kept my computer off all day long yesterday and it was so marvelous I have decided to take Sundays as my don't go on the blogs, don't sign on to Facebook, only check my e-mail once day. I feel so refreshed and ready to jump right in to the midst of things again.
So in lieu of that decision I am going to do Writerly Monday instead. So here it is. But today I have a couple of different things that I want to do, hence the title of the post.
First, I have to tell you that you should go over to Summer's blog for her Does This Make Me an Author? Contest Because she finished her draft and, honey, finishing your first draft is definitely something to celebrate!
Besides, I get extra points for posting it and I want that mug. Seriously.
Second, I am going to reveal to you which is the truth amongst the outrageous lies that I told last time. If you didn't have a chance to guess, you can go here and do it now. I'll give the answers at the end of this post so you won't accidentally see the answer before you go guess. So I guess this isn't actually second, but fifth? Or something...
Third, I am SO EXCITED!!!!!!!!!!!!!!!! Falen held a 100 followers writing contest and she was going to have 3 places, but then she added a fourth place and it was a tie and I was ONE OF THE WINNERS!!!!!!!! I can't believe it. She posted the story here and while you're there you can also read Palindrome's short story, which was also full of awesomesauce. And Falen's going to be posting the other winners throughout the week so you should definitely check it out.
Fourth, Thursday is the first of April, and while, for most people this means it is a day to plan your most hilarious pranks, like Joan Crawford (whose blog you must follow and read, because every time she posts you will lose like ten pounds from laughing so much) for me it means the beginning of

I kind of talked about this before, but I'm going to expand on it a tad bit. I am a bit spastic as a writer and some day (probably when April is over) I will post about that. Not only am I not consistent in taking time to write, I am also not consistent in the genre/type of thing that I write.
I am hoping that Script Frenzy will help me with the first one and then after I get into writing regularly I will work on the second one.
When I first signed up I was all ready to do a romantic comedy screenplay. But as I thought about it I realized that I didn't have the idea formulated enough in my head for it to work. Although a lot of the fun of this kind of thing, like NaNo, is to discover as you write your head off, I knew by picking this project I would be setting myself up for failure and probably end up hating this fun idea that is floating in my head. So I will leave it to percolate and maybe do it next year or the year after that or in ten years or something.
So then I decided it would be fun to take one of my favorite children's authors and turn one of his books into a movie and I had bits of it in my head and I've considered this one for about a year, so I thought that would be a good idea. Then I realized I just don't have time to do the prep work required to familiarize myself with screenplays before the beginning of April. It just came down to a time issue. So I think I'm going to save this one for next year.
Which brings me to what I have decided to do. I am going to write a play. I have read a lot of plays and even been to see quite a few, so I feel much better prepared to work on this.
The idea is something I have been working on for, probably ten years now. I wrote a short story entitled, An Unlikely Fairy Tale and for now that is the temporary (oh so temporary) title I am using for the play. Until I can come up with something better.
Anyways. It's kind of a twist on the Cinderella story, blah, blah, blah. The short story is SO boring I don't know why I ever stuck with it, but I am glad I did. A while ago I thought it might work better as a play, than as a story. So I started playing with it a little bit. Over the course of doodling around with the story some very bizarre and hilarious things started happening, the most important of which was that the story became secondary to the narrators and suddenly they were taking over the main roles. and I love it.
So I am very excited to begin working on that and completely start it over with this new plot in sight.
Have you ever been working on something and had a secondary or completely new character hijack the entire story? Do you find that fun? Or exasperating?
And fifthly and finally, here are the answers to my six lies and a truth:
For those of you who wish to torture yourself after this excessively long and rambling post, you may peruse some pics and descriptions of the play below.
As I said before, it's about 3 monkeys in an experiment to see how long it will take one of them to type out Shakespeare's Hamlet.
My name was Swift, my sister (not AchingHope, but Rae, who attended the same school I did) was Milton and another classmate was Kafka. With our director we worked up these ridiculous characteristics too. Mine was British and rather violent. Milton talked in almost a Mickey Mouse voice that had us constantly trying not to crack up and a no-nonsense outlook. Kafka had this breathy Marilyn Monroe voice and kind of a ditzy attitude.
At one point in the play, Swift gets angry that they're working for peanuts (literally) and I was supposed to knock this bowl of peanuts over. During one of the performances I got so into the part that I smacked the bowl clear off the stage and peanuts scattered everywhere. And I do mean EVERYWHERE! I had a good friend near the front row and I scared her half to death when it happened, because she almost got hit with the bowl! Ha! Good times.
Ooff... I went looking for pictures and they are TERRIBLE quality and I also don't want to share my costars pics without their permission, so that limits it a little bit. But I will put one or two up anyway, because I said I would.
Gah! What happened. I added the pics and the text went CRAZY! Weird. 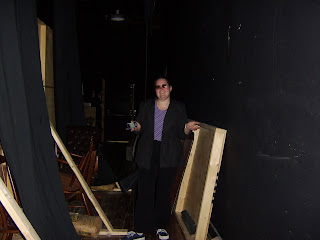 Here I am as the crazy, laid back business woman. 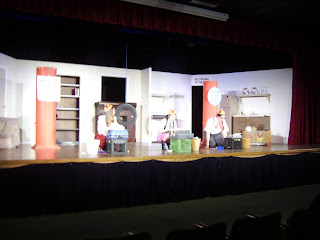 Here's a view of the whole stage during "Words, Words, Words". Like I said crummy quality. If anyone could identify my costars from this pic they are brilliant. 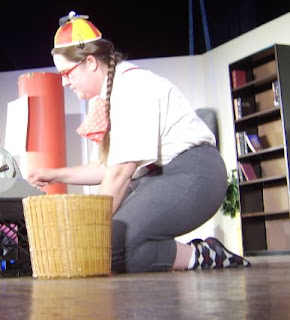 Here Swift is hard at work, coming up with the brilliant plan to kill our scientist with a poisoned rapier. 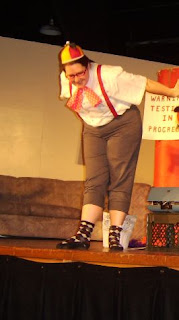 And here I am taking a bow. That is REALLY an unattractive shot. We loved the beanies and giant bow ties though :)
Now that is quite enough embarrassment for one post! See you all for Retail Wednesday!
Ramblings by Rebecca T. at 9:14 AM

haha! Beanies!
Also, i spend sunday writing my blog posts for the week and it makes things so much more manageble. And i rarely post on the weekends (or look at FB) either and it serves me well.

I read your story over at Falen's blog and thought it was fantastic! Huge congrats on placing in the contest :))

I had like seven thoughts when reading your post, but I can't remember any of them right now. I think "Huzzah! for winning contests!" was one of them.

vw: sillic, feeling silly and sick, like I do right now.

Great story, I read it this morning. I don't post on weekends, sometimes I'll look at blogs but don't comment, depends on the post. Great play!

@Falen: yes, the beanies were terrific.

@Nicole: Awww... thanks *scuffs dirt with toe* Thank you for coming over! glad to see you :)

@AchingHope: That's all right, I know what you were going to say anyway. All 7 things, plus one you forgot. Mwahahahaha >:)

@Piedmont Writer: Thanks! I had so much fun with the story :)

@Jenn: Well, you know I wouldn't put up such ridiculous things for just ANYbody.

And I don't like Mr. Darcy. (please do not stone me for such great heresy)

@Teebore: exactly my feelings on Mr. Darcy. Exactly. And no sense of humor. Pfft.

Rebecca T.
I've recently finished my Masters in Library and Information Science and am starting my first "real" job as an instructional librarian at a lovely college. I spend my free time reading at all hours of the day, catching up on my favorite tv shows, and scribbling away when I'm in the mood. I'm a quirky kind of girl just trying to get through life with the help of my amazing Savior. I love movies, music, TV, books, Joss Whedon, my family, LOLCats, writing, hanging out with my sis, eating chicken, cheese and chocolate (though not all at the same time), and staying up way too late.

You can also find me over at Booksellers Without Borders NY - a group blog of us Borders employees that weren't willing to give up our store spirit!