7 Reasons You Should be Watching Cult 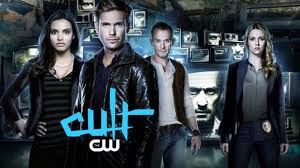 1. It's a TV show about a ... TV show. Yeah. Every time I try to explain it to someone it sounds absolutely ridiculous, but it's not. I tend to get sucked into TV shows I love ... just a little bit *cough cough* and I love that they took this idea and spun a whole mystery around it.

2. Matthew Davis. Okay, so I admit that he is the only reason I started watching this show. I loved him as Alaric on The Vampire Diaries and I was so sad when that character had run his course. So as soon as I heard he was going to be in a new show I was all over it. I practically had my DVR set before they even announced the premier date. Not only is he easy on the eyes, but I love the character he plays in Cult as well. It's actually a fairly similar part, but his tortured past, missing brother, and bulldog tenacity makes him someone you can really root for.

3. The show is smart, clever, and interesting with a mythology that keeps getting more and more intricate - but stays away from the paranormal or the supernatural which is a nice change of pace.

4. It doesn't take itself too seriously. The show pokes fun at itself, at fans, at other genres of shows - it's serious, but just light enough that it actually makes it more believable.

5. It's actually fairly believable. With what little I know about TV fandoms online, I can absolutely see a cult developing out of a TV show with fans willing to kill (literally) to be considered "true believers." My Dad and I started watching The Following, but after a few episodes it had crossed over into such unbelievable territory that we couldn't take it. It was also a lot more gory. Cult has a lot of similar elements, but the premise is something I'm much more willing to swallow. And it's a little lighter on the "horror" side.

6. The relationship between Jeff and Skye. From the minute these two meet there is a great chemistry. And I love that they have developed a friendship, but that the show creators don't seem to be dragging out the romantic side of it. Only 5 episodes in and there is already a definite movement toward something more in their relationship. Not that I like things to move quickly just to move quickly, but it can be crazy-making when you know the two main characters are going to get together eventually, but it takes like 4 seasons for no reason whatsoever.

7. The "other" TV show - also called Cult of course, and also put out by the CW (ha). I love the way we get snippets of this other show. Alona Tal and Robert Knepper play the girl who escaped and the cult leader SO well. Plus, getting to see them as actors and actresses "behind the scenes" is just such a fascinating construct for a show!

So there you have it. Here's one fan who is holding her breath and crossing her fingers that we get another season (at least)!
Ramblings by Rebecca T. at 10:23 PM No comments:

Rebecca T.
I've recently finished my Masters in Library and Information Science and am starting my first "real" job as an instructional librarian at a lovely college. I spend my free time reading at all hours of the day, catching up on my favorite tv shows, and scribbling away when I'm in the mood. I'm a quirky kind of girl just trying to get through life with the help of my amazing Savior. I love movies, music, TV, books, Joss Whedon, my family, LOLCats, writing, hanging out with my sis, eating chicken, cheese and chocolate (though not all at the same time), and staying up way too late.

You can also find me over at Booksellers Without Borders NY - a group blog of us Borders employees that weren't willing to give up our store spirit!